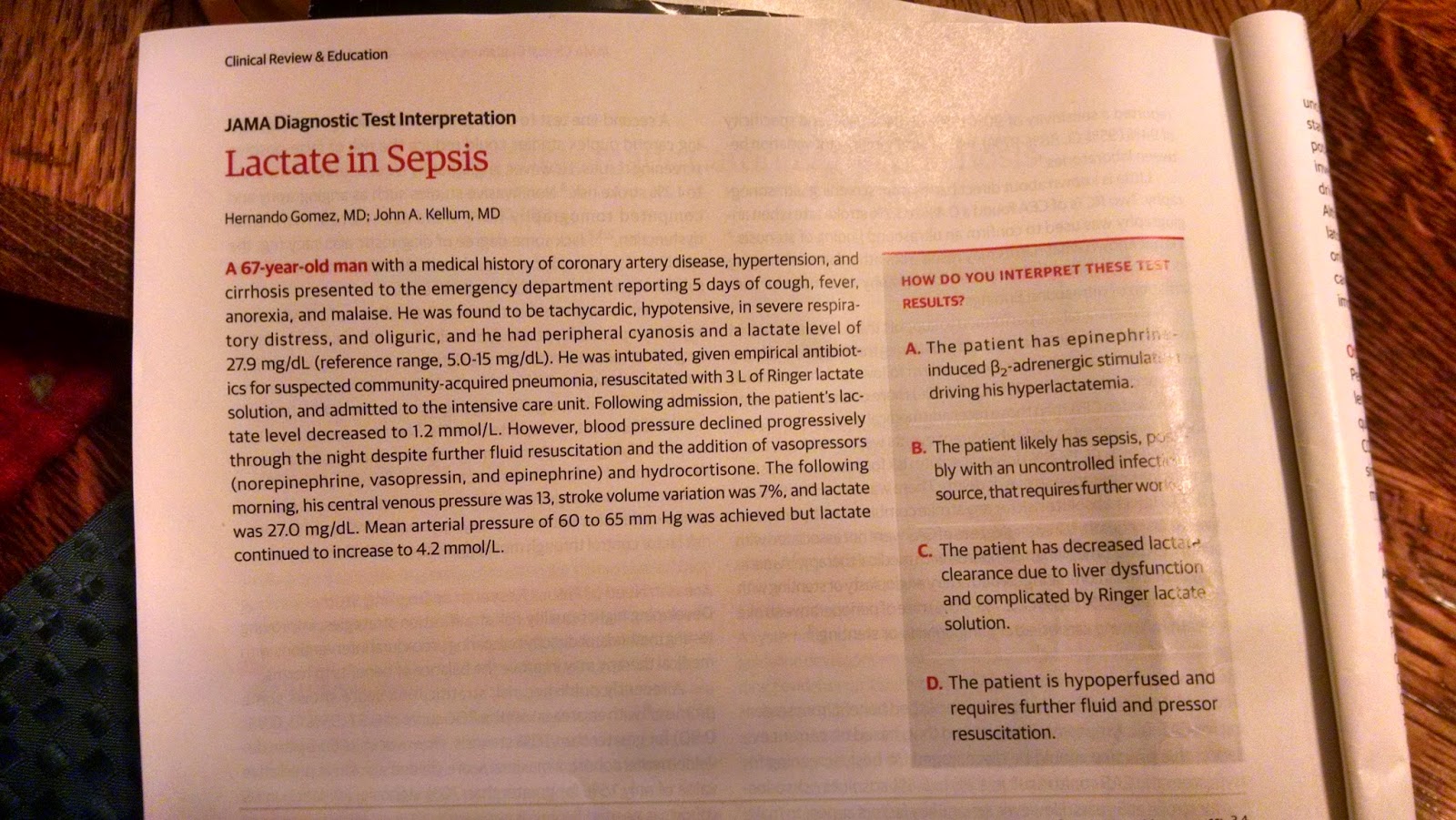 
So I was exasperated the other night when I got a call from the RN about a lady in respiratory failure with an evening troponin level of 2.1.  The previous level was 1.7.  I inquired with the ordering physician (a neophyte) why we were drawing troponin levels that are non-specific in this clinical scenario.  The response was "to trend them."  OK.  We're trending a non-specific result that tells us nothing.  "Still non-specifically elevated?"  "Yep."  Awesome.

Which brings me to this piece of sophistry in JAMA this week as regards lactate in sepsis.  I will summarize the authors' main contentions and then, in "mythbusters" fashion, declare them true or false.  I will ignore the fluctuating units in the article as a source of confusion.

Premise 1.  We understand the molecular biology of lactate metabolism, thus we can use that understanding to deductively reason the correct therapeutic maneuvers.

Conclusion 1.  FALSE.  The pathophysiological model of disease has been shown time and again to fail us as regards guidance for therapeutic interventions that are of benefit to patients.  You can talk about dog lab experiments from the 1950s till you're blue in the face, but that reductionist, isolationist understanding, however true it may be, cannot be trusted to translate deductively into an understanding of what's going on in an intact organism with a naturally occurring disease (as opposed to a disease model in the lab).  I could write a book about this, but I demur (for now).

Premise 2.  The correlation between lactate levels and survival from sepsis can be used for prognostication.

Conclusion 2.  FALSE.  The authors report, in paragraph two, first a likelihood ratio (LR) of 1.4-2 of mortailty for lactate > 2.5 mmol/L and 2.6-6.3 for >4 mmol/L lactate levels.  It is widely accepted that a LR of around 10 is useful for a diagnostic test.  That corresponds to both a sensitivity and specificity of 90%.  That it is predictive does not mean that it crosses a decision threshold that will allow us to change our course.  What physician is going to tell the grieving Mrs. Jones that based on her husband's lactate level, his baseline probability of death (the authors do not describe how we are to determine this baseline prior probability of death that the LR of lactate is going to modify) has increased by such and such an amount so maybe we should "pull the plug"?  For those interested in playing with it, an LR (likelihood ratio) of 4.0 corresponds to both a sensitivity and specificity of 80%.  You can play with the Bayes' Theorem calculator on this blog and see what that LR does to the probability of death.  For example, if the prior probability of death is 15%, about average for an ICU admission in the US (and even if it is not, the example still stands) the posterior probability with a LR of 4.0 (mid range of the authors' example) is 41% with a lactate above the threshold and 4% with a probability below the threshold.  Do the priors and the posteriors in this example cross decision thresholds?  And even if they do, do we not have other prediction frameworks that are more accurate such as APACHE?  Do the authors recommend them?  It seems, ultimately, as if the authors have taken a position, and  selectively sought scenarios which defend it.  In sum, the fact that some "prognostic" marker has a statistically significant correlation with mortality does not justify its use in routine clinical practice. This is true of basically every single biomarker I am aware of.  If prognosticating using a biomarker or other predictive model (such as APACHE) were useful, it would be standard of care in all ICUs.  But we do NOT routinely use any predictive model or level to estimate mortality in the ICU (maybe we should).

Premise 3.  "Lactate was used for prognosis, to drive therapy, and to understand the course of disease."

Conclusion 3.  FALSE.  I have already debunked the prognosis argument.  Further, in the vignette preceding the discussion, the authors describe resuscitation guided by parameters other than lactate.  The only "problem" in the vignette is that we are asked to explain the lactate that "unexpectedly" increases on day 2 (without being told anything about the natural history of variation of lactate levels), a problem which should not exist because the lactate level should not have been repeated.  The elevated lactate did not cross any decision threshold for a change in therapy, therefore it was a useless test (See Kasirer and Pauker, NEJM, 1980 for further explication).  Indeed, the rising (or "trending") lactate, only served as bait for therapeutic misadventure.  Understanding the course of disease?  Only experience, logic, insight, and reflection in the absence of misinformation and misguidance can yield that.

Premise 4.  "Perhaps the main reason that lactate is used....is that alternatives are quite limited."

Conclusion 4.  NONSENSE.  That there is no good test for the outcome that we want to test for is no excuse for using a flawed test, the results of which have no meaningful bearing on the course of illness or the decisions we must make along that course.  Seriously?

I am at a total loss as to how we let misguidance such as this pass muster in a journal such as JAMA, or how we continue to inculcate young and developing physicians with such sophistry.

But I recognize the result.  "Trending troponins" in a lady with COPD and respiratory failure on the ventilator.