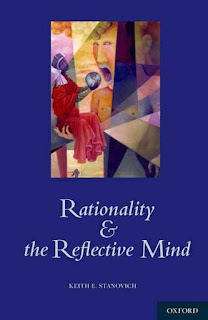 In the presentation on Epistemic Problems in Medicine on the Medical Evidence Blog, I begin by highlighting the difference between intelligence (book smarts) and rationality (common sense).  Oftentimes thought to be one and the same, they are distinctly different, and understanding failures of common sense among very intelligent people can illuminate many problems that we see in medicine, several of which have been highlighted on this blog.

Intelligence is the ability of the mind to function algorithmically, like a computer.  Intelligent people are good at learning, through rote memorization, rules that can be applied to solve well defined problems.  They are also good at pattern recognition which allows them to recognize a problem type to know which rule applies to it.  This kind of intelligence is very precisely measured by IQ tests.  It is correlated with scores on college entrance exams like the ACT and SAT and with other entrance tests such as MCAT.  Of course, intelligent people need to devote the time to learn the rules to answer the questions on these tests which measure both aptitude and achievement.

Rationality, I think, is more closely aligned to the notion of common sense and it shows very little significant correlation to IQ in any domain in which it has been investigated.  Cognitive psychologists talk about two kinds of rationality.  The first is how well a person's beliefs map onto reality (the actual structure of the world), and it has been termed epistemic rationality (sometimes also called theoretical or evidential rationality).  Persons with epistemic rationality have beliefs that are congruent with the world around them and which are strong in proportion to the strength of the evidence supporting them.  Thus a physician who believes that bloodletting or mercury therapy cures disease in the 21st century would be considered to have suboptimal epistemic rationality, as would a person whose fear of Hantavirus while hiking in New Mexico is grossly disproportionate to the actual statistical risk.