Don't Judge a Brain By It's Scan: The Importance of Actionable Information in Medical Decisions 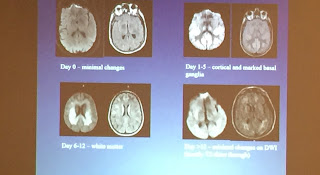 A common and vexing problem in ICUs everywhere is posed by the patient with diffuse encephalopathy or coma - patients who are colloquially said to be "out to lunch" or "the lights are on, but nobody's home."  The underlying cause is usually a toxic, anoxic, or metabolic malady and the only available treatment is to remove the underlying insult (toxin, hypoxia, or metabolic derangement, e.g, uremia) and wait patiently to see if the neuronal injury improves or resolves.  That is perhaps the hardest part - waiting patiently, with all the attendant uncertainty and resulting anxiety, for days, or even weeks.  This, despite my knowledge that the vast majority of these patients, save for those with severe anoxic brain injury (ABI) will mostly or completely recover with supportive care and "tincture of time."  It is very difficult for me, as a physician, to watch, mostly knowing that the patient has been "out to lunch" for the past 72 or 96 hours because of drug effects, which is very common.  "Shouldn't the drugs be cleared by now?", I keep asking myself.  "Maybe I'm missing something," comes the id's reply.  This anxious uncertainty serves as an impetus for action - but what action is there to take, and is it helpful on balance?

The urge usually is to get a variety of neuroimaging tests, CT (the "donut of truth"), MRI, MRA, and probably an EEG.  But I resist this urge mightily.  These tests rarely yield actionable information - that is, data that I can act upon to change the course of care, as an alternative to waiting.  Say for example, as is often the case, the CT scan and the MRI scan are normal.  How has this helped me?  I still have a comatose patient, and I'm still stuck waiting.  (Also, without meticulous care in explaining the test's purpose and results to her family, confusion ensues.  "If the MRI is normal, why is she in a coma?" is a commonly uttered frustration.

Alternatively, the MRI can look horrible and the patient can still do very well.  I recall a case about a decade ago where we sent a patient with hepatic/toxic/metabolic/anoxic encephalopathy to "the magnet" (MRI scanner) and the neuroradiologist soon after called:  "Is this patient still alive?" he demanded.  Yes, indeed she was.  "Well she won't live long, her whole cortex is necrotic! [rotten]," he forcefully propounded.  Two days later the patient awakened.  I do not believe the radiologist's read of the MRI was in error, only that he erred in confidently inferring that function follows form.  "Don't judge a brain by it's scan" might be a useful heuristic here.  Telling this anecdote to patients' families led me to stumble upon a communication pearl:  My not getting the scan is in essence giving the patient the benefit of the doubt - because I don't want to find something that looks bad and ruins my optimism.  This is generally a very positively received explanation for families who may themselves be demanding scans, action, do something, Doc!

There are indeed cases in which radiological imaging does reveal important and undeniable information, such as stroke, hemorrhage, herniation, and swelling.  I do not impugn all scans, many times they are very useful.  I only wish to cast skeptical doubt on that large fraction of scans which are done as a pat response to non-specific encephalopathy where they are unlikely to yield actionable information.

Beyond the costs, radiation, and risks of transportation associated with the routine use of these scans, which are often not counterbalanced by the yield of actionable information, there is a psychosocial cost - in my observation, these scans increase families' anxiety.  Firstly, when you say you're going to order an MRI, false hope that we can learn what cannot yet be learned (until enough time has passed for the patient to awaken) is engendered.  The family inevitably wants to know when the MRI will be done.  The nurse says 4 PM, there are invariable delays, it gets done at 10 PM.  Anxiety pervades all of those hours.  When will it be read?  Nobody knows, but we offer "in an hour" as a guess.  More anxiety, until 1AM when the report becomes available - but it's inscrutible.  It talks of diffusion weighted this and that, and the neurologist is not available to put it into context.  Anxiety mounts.  In the morning, the neurologist attempts to explain all these little areas of this and that, or a normal scan or whatever.  But none of it tells the patient's family what they want to know, namely "Will my mom awaken?  When?"  Those questions remain unanswerable, but the family has been put on a psychic roller coaster for the past 24 hours thinking the MRI will answer them.  When it is finally done, the reason they can't divine the meaning of the scan is because there is no meaning of the scan - it is devoid of actionable information and should not have been ordered in the first place.
Posted by Scott K. Aberegg, M.D., M.P.H. at 10:36 AM No comments: