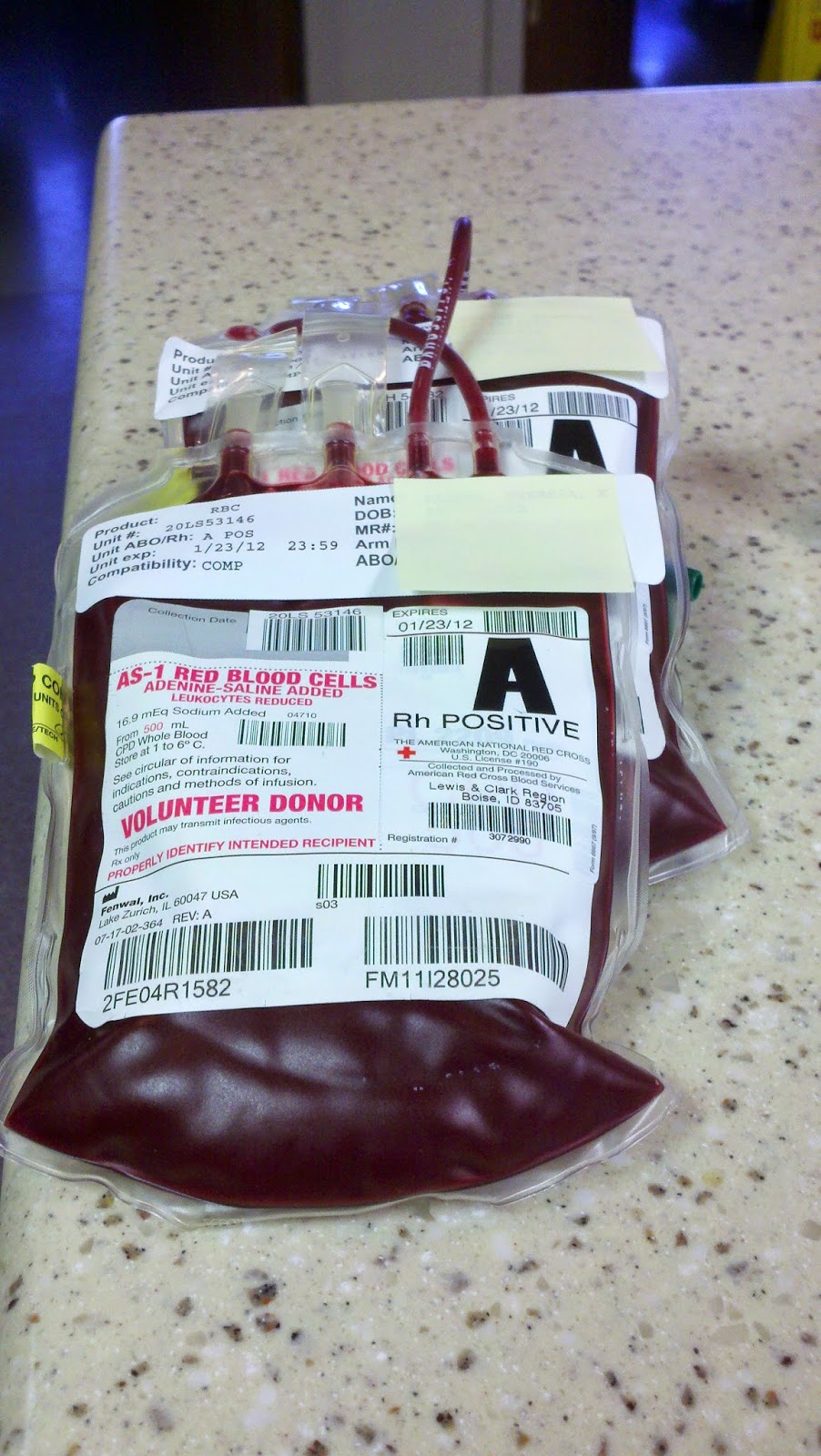 Plethora is an excess of something, used in medicine usually to refer to a fluid, especially blood.  Plethoric facies describes a flushed and full red face, overfull with blood.

And so it is with the Red Cross.  It has become plethoric as detailed in this New York Times article from back in August.  Fortunately, we are giving fewer transfusions in medicine, perhaps at long last internalizing the data from the heft of recent studies on the lack of benefits of transfusions in multiple arenas.  This decline in transfusions has led to a surfeit of blood and falling prices per unit, which is leading the Red Cross to hemorrhage employees.


The first reason is that donating blood is enmeshed with the notion of patriotism.  Like that other great scourge spawned by World War II (the third party payer insurance system in American healthcare), WWII created the need for blood for wounded soldiers and the American Red Cross took up this effort in 1940 for wounded British soldiers in a campaign called "Plasma for Britain".  This effort was expanded when the US entered the war in 1941, and some 13 million pints of blood were procured during the WWII war effort.

We are no longer engaged in a war the scale of WWII, but we are still told that we are "saving a life" by donating a unit of blood.  Well, not exactly.  We may statistically or probabilistically be saving a life in the aggregate but I wager that on average rarely does a single unit of blood save a person's life.  We get all bent out of shape when we see a hemoglobin level of 5 or 6 mg/dL, but then we see Jehova's Witnesses survive commonly with far lower levels of hemoglobin.  So, even when we physicians think that a unit of blood is "lifesaving" we are likely to be mistaken.

If the blood is not saving lives, then it follows that in many cases it is being wasted.  In this KevinMD blog post the author, an oncologist, bemoans the wasted blood products they poured into a dying man in the ICU.  This scene is far too commonplace.  But what is wasteful depends on what you value, and value judgments regarding medical care and waste are something that we as a society are reluctant to declare.  Another value judgment would be whether an alcoholic who has been admitted six times in as many months for recurrent gastrointestinal hemorrhage due to continued drinking should have 20 or 40 units of blood products poured into him each time he comes in to the hospital "bleeding to death".  (Again, if you donated one of the 40 units, did you "save a life" or did you save 1/40th of a life?)  Perhaps donors could earmark their blood for certain subgroups:  post-partum patients, post-surgical patients, etc.  But then somebody would cry "DISCRIMINATION!"

Which is what gay rights activists have been calling the Red Cross for its lifetime prohibition on donation by any potential male donor who has ever had sex with another man.  This stems from the statistical fact that this places that man in a category that makes him more likely to have HIV which if undetected because of [now narrow] gaps in the detection window could be passed to the recipient.  Now, if you are a gay man, you may donate blood unless you have had sex with a man in the last 12 months.  So, fairness to groups crying discrimination has now been accounted for in the calculus of ensuring the safety of the blood supply.  It is now the safety and fairness calculus of the blood supply.

This is troubling for several reasons.  First, given the unreliability of historical reports (because of error or concealment) of patients and I presume donors, some at risk or infected donors are going to slip through and some recipients may end up infected with HIV as a result.  (Put simply, some men will forget the last time they had sex with a man or they will lie about it, the latter which of course they could always have done - denied having sex with a man - but maybe it's easier to lie about recently doing it than it is about ever doing it.)  There is little doubt that the blood supply will become less safe to some degree with this policy change.  (Feel free to use the Bayes Theorem calculator on this blog and play with some numbers.  Sensitivity and specificity of 0.999 would be good starting places.  And don't forget that if a sample is mishandled by an incompetent lab tech, or the assay is from a bum batch, all bets are off.)  Second, intravenous drug abusers continue to enjoy a lifetime ban on donation.  Apparently they're not well organized enough politically to decry the unfairness leveled on their group by elitist statisticians and policy wonks at the Red Cross.  Finally, and most important from a pragmatic standpoint, is this move could be more easily justified if there were a dearth of blood, but there is a surplus, and indeed 5-10% (I bet more) of the blood that is donated is thrown out.  (And I'm not here accounting for the blood that was transfused with good intentions but effectively wasted for lack of benefit.)  Usually a surplus allows you to be more selective because there are more choices and prices are lower.  Not so here.  The Red Cross has estimated that allowing men who have had sex with men more than 12 months ago to donate blood will increase donations by 2-4%.  My take on this whole issue is:  since we don't need more blood and this move cannot make the blood supply more safe, this is not about supply or safety, it's about fairness; and since nobody is addressing the plight of reformed intravenous drug users who have abstained for 12 or more months, it would appear that the Red Cross is not so much interested in fairness as it is bending to pressure from well-organized political groups.   If I were a patient receiving a transfusion, I would care more about fairness to me, than to the donor.  And fairness to me is a safe blood supply.  (Yes, you surmised the irony correctly:  it's the altruists who are claiming unfairness, not the recipients of the altruism.  And further, if the altruists have as a goal altruism and charity, they could have satisfied this goal by giving cash donations to the Red Cross.  Alas, you surmised correctly again.  Altruism is not their goal.  Perceived fairness to their group is.  And they wish for us to compromise safety for their "right" to be altruists in this one very limited sphere of limited importance and where alternatives are available.)

Another thing that people don't realize is that the Red Cross (and others - the Red Cross is responsible for about 2/3 of the blood trafficking in the US) sells their blood to hospitals.  That's right, you donate it, the Red Cross sells it.  Partly that is to offset the costs of storage and transportation and testing and logistics and the like, but they also use the revenue from blood donations to subsidize other operations.  (If there were not money in blood, private companies such as General Blood would not exist.)

Finally there are physical/medical and economic costs of donation.  Donating blood depletes iron which can lead to iron deficiency in marginally replete individuals.  And all that time and driving around and processing and refrigerating and storing blood costs money and produces emissions.  All this is worth it, if we need the blood and we're not wasting it, either by throwing it out, or giving it to people who will benefit little if at all.

Like Ronald Reagan said, if you want less of something tax it.  If you want more of something, subsidize it.  Through their donations to the Red Cross, Americans have, since 1941, been subsidizing the blood transfusion industry.  And with surplus comes waste.  Were it not for the large surplus of available blood, I wager that physicians would not have evolved, over the past 70 years, to be so transfusion happy.  In the past 15 years, we have spent tens of millions of dollars studying transfusions to prove that they are unnecessary.  This scenario may not have unfolded if we valued more dearly this precious gift from an altruistic donor, and I further wager that we will value it more as the supply inevitably falls.  But for that to happen, we are going to need fewer people to donate.  I have given you the reasons.  Think twice next time.

But you need not withdraw your altruism completely.  Unless you have a rare blood type (which makes your donation less fungible), you could give a cash donation to the Red Cross.  Or, sell your blood to one of their for-profit competitors and give the cash to the Red Cross.  How much?  All of it?  You tell me after you have the bills in hand.
Posted by Scott K. Aberegg, M.D., M.P.H. at 3:49 PM