There are various interventions that may occur during an attempted resuscitation and immediately after a successful resuscitation in the ICU (intensive care unit.)  These include CPR with chest compressions, electrical defibrillation to shock the heart back to a normal rhythm, various medications that affect the heartbeat and blood pressure, the use of various apparatuses to get air into the lungs, etc.  The Sushi Menu asks patients to check which parts of the interventions used during a resuscitation they wish to be used, if indicated, during their resuscitation, and which they do not want to be used .  Here is a representative Sushi Menu - some are more complicated than this one, some are simpler. 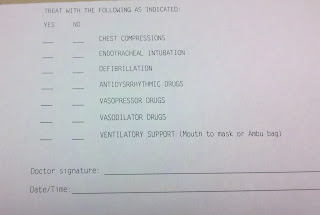