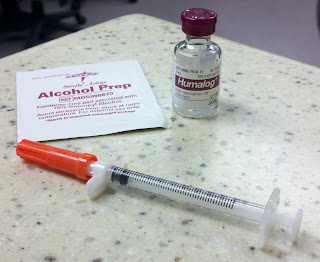 
If it were the latter type of patient, that is, it was complicated, and it was hard to tell what was going on and what led to what - the DKA to MI or the MI to DKA or both coincidental, or some intermediary - you might wish to check blood sugars every one hour, extended chemistry panels every few hours (maybe even every two!), titrate insulin drips targeted to a narrow range of blood glucose, make the patient NPO, etc.  In short, there may be both uncertainty regarding the natural history of the disease up until presentation and thereafter, and urgency about controlling the variables until you know how things are going to pan out.

But, as I used to tell my housestaff, "The response should be proportionate to the stimulus."  If the patient is an otherwise healthy male with simple insulin non-compliance, the story is different.

A patient with SEVERE DKA due to simple non-compliance is going to be better and ready for discharge within 24 hours, maybe even within 12 hours.  Let's assume it's 12 hours, even with a starting HCO3- level of 4 and a pH of 6.95.  During those 12 hours we can mess around titrating fluids to some perceived deficit, check the blood sugar 12 times (hourly) and the CHM-7 (BMP) 3 times (every 4 hours - or more!), keep the patient NPO, run the insulin drip at 10 units per hour (100 kg patient, initial blood sugar 1000), at a certain point reduce the rate and start D5 or D10 infusion, titrate the insulin and the dextrose back and forth, etc.

Or, we can give 5 liters of isotonic fluids (the average deficit in DKA); run the drip at a fixed dose of 5 units per hour (I made that dose up.  It works.  And it's like annumeration with the fluid deficit); check blood sugars every 2-3 hours; reduce the rate to 1 unit/hour (the average baseline daily dose in a Type I idiabetic) when the blood sugar is under 150; not check any CHM-7s for the first 12 hours; feed the patient whatever he wants to eat and drink whenever he wants to eat and drink it, diabetic diets be darned (after all, there's nothing diabetic about a D5 infusion).  12 hours later the CHM-7 is checked, if the bacarb is over 15, the patient is transitioned to SQ insulin. This strategy can be accomplished in about 5 lines of orders with 4 blood sugar checks and one set of  labs over the first 12 hours with only 2 insulin doses and no "titration"!

And here is why we may wish (and the patients may be grateful for us) to follow this strategy.  It makes little sense to hurry and drive the blood sugar down low with a high insulin drip rate, when the response to a normal blood sugar is going to be starting D5 or D10.  If we're going to swoop in and rescue the patient from a high insulin dose, why not just reduce the starting dose and take our time driving it down?  Likewise, why would we make a patient NPO?  If s/he wants to eat anything, I think that's GREAT!   First, it tells me that the therapies are working and s/he is feeling better.  Second, eating will put glucose in the system (naturally, via the gut) and probably pre-empt me from using an IV infusion of dextrose.  Third, eating without difficulty allows for earlier discharge planning.  So I see no rational and logical reason to restrict the diet of a patient in DKA whatsoever.  None whatsoever.

Detractors may object that the ketosis needs a higher insulin dose for longer for its resolution and that my strategy is prolonging the process.  I do not believe this to be so.  The treatment time of DKA is driven more by the time it takes to transition back to normal care from intensive care than it is in the actual resolution of the ketoacidotic state, the latter which almost always resolves within 12-24 hours.  But if it resolves at 1 AM, I can assure that no major moves toward transition are made for many hours and I maintain that the major delays are the transition back to usual home care rather than resolution of physiology.  We compromise on transitions not resolutions.  Our target should be the former.

How about the frequency of blood sugar checks?  Well, supposing we start at 1000mg/dL.  The sugar is going to be high for many hours!  Do we need to keep checking it every hour or to to reaffirm what we already know?  Do we worry that it's going to go UP after we start to treat it?  What kind of Twilight Zone are we living in?  And sure, it could go down too fast.  Especially if we start with a high insulin infusion rate!  So why don't we back down on that for safety's sake and save the patients several fingersticks in the meantime?  But what if the initial sugar is only 450 mg/dL?  Well, then, what was the bicarb?  13?  In that case, the DKA is not so severe and this is all the more reason to back off on the initial insulin dose.  "The response should be proportional to the stimulus."  Indeed that latter patient can probably be effectively treated with SQ insulin and fluids, but that's another story.

And the CHM-7s?  Also largely useless.  If the K+ starts at 6.5, what direction is it going to go with insulin pushing K+ into cells and the post-resuscitation osmotic diuresis (assuming it occurs - this is presumably being monitored) causing a kaliuresis?  It's going to go down.  To below 2.5 or some other fearful number?  Highly unlikely, experience reveals, especially if we don't overdo it on the insulin and the fluids (you know, those D5 drips at a rate of 300 that allow continued administration of an overdose of insulin).  Do we need to know how fast the bicarb is rising?  Absolutely not!  We know it will take 12-24 hours to rise!  So why check it during the first 8-12 hours?  No reason!

If we are realistic in our assessment of the natural history of simple DKA due to non-compliance or an uncomplicated intercurrent illenss, we can reduce by 50-66% the number of fingerstick glucoses we check, by more than 50% the complexity of our insulin orders, we can avoid D5 and D10 altogether, we can feed patients earlier, we can eliminate all but daily or every 12 hourly chemistries, and we can make patients, nurses, and payers happier all the while.

While I'm at it....  Why do we give these patients a diabetic diet?  Are they eating a diabetic diet at home?  Doubtful.  So why would we feed them an artificial meal in house, and titrate insulin dose adjustments for discharge to their response to that artificial diet then let them go home and revert back to their regular diet?  It's an overlysimplistic approach and is likely to be off the mark.  And suppose they tell you they're eating a diabetic diet at home?  What is the reliability of that information?  I'm not sure I know the right answers here, but I do know that we make some silly assumptions in these cases where non-compliance throws a monkey wrench into the usual routine.  And the end result is likely to be Status Iatrogenicus.
Posted by Scott K. Aberegg, M.D., M.P.H. at 9:11 PM