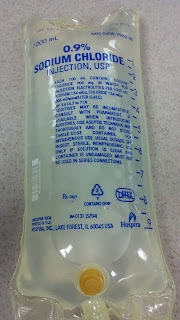 
One reason for rates is to solve a problem that we ourselves created:  the NPO order.  Save for patients who need to be NPO in preparation for anesthesia or surgery on the gut, I don't know why NPO is so frequently written on admission.  It creates the fluid deficits that we will later have to address, makes patients uncomfortable, forces more cumbersome routes of drug administration, and exacerbates nutritional deficiencies.  If patients are allowed to take a diet, they won't need MIVF any more than I do - they will ask for a glass of water.  (And if a patient with say, DKA, eats a meal tray and then pukes it up - so what?  If s/he would rather eat and puke than be NPO, so be it.)

Another reason is the [false] belief that we can calculate with some degree of precision the "physiologic" daily fluid intakes and losses and that that calculus can allow us to meaningfully intervene on a patient's fluid balance.  I am not confident that we can rely on this calculus or that, in internal medicine, there is any calculus going on at all - it is just some rate per hour in increments of 25cc/hour, e.g., 75 or 100cc/hour.  And I know of few physicians who are aware of the volumes infused in all of the other intravenous medications they order on admission.  (I just had to go check with one of the RNs to find out that 3.375g of Zosyn comes in 100cc of carrier, so a days worth of Zosyn accounts for 25% of daily fluid needs.)  Oftentimes, the intravenous medications alone are sufficient to replace daily fluid needs.  Nonetheless, we often see patients in the ICU receiving not only massive volume infusions from multiple drips (the necessity of these is a topic for another post) but also the obligatory MIVF at 100cc/hour, perhaps a neglected carryover from the transfer from the floor.

Which segues me to one of the nettlesome drawbacks of MIVF - they are simply forgotten about, and lead to surreptitious status iatrogenicus - fluid overload and congestive heart failure, especially in the elderly.  An 89 year old woman with an ejection fraction of 38% weighs 55 kilos on admission for a fall and receives 100cc/hour of MIVF for 4 days in the hospital.  Pulmonary is consulted when her oxygen requirements escalate.  During this time, she has received TEN LITERS of fluid, and gained 22 pounds FROM MIVF ALONE!  (Where went the calculus during this admission?)  How many doses of furosemide will it take to correct this problem, and how long will it prolong her hospitalization?  I wager that this happens more frequently than dehydration would happen if we banished MIVF altogether and let people drink.

But suppose that we decide that in any particular patient there is a daily deficit that needs to be replaced - why do we replace it with a coutinuous infusion of MIVF?  Why not do what I do daily when I detect a fluid deficit via thirst - replace it with a bolus.  I see no good reason that justifies continuous MIVF infusions.  If the daily deficit is 1600cc, give it as a bolus in the AM or divided into two doses like any other medication.  This would facilitate the combat against another woesome order that promotes status iatrogenicus - Activity:  Bedrest.  This is another topic for another post, but surely attachment of the MIVF line impairs mobility in the hospitalized patient with all of the associated untoward consequences, e.g., deconditioning.  It's hard to get out of bed with a Foley, an MIVF line (for STRICT I's and O's for the calculus that won't be done of course!), a pulse-ox probe and telemetry wires, invariably woven into a confusing and complex tapestry, essentially a form of Posey bodynet over the bed.

If the extent of the deficit is unknown, or there are concerns about "putting the patient into failure" the intermittent bolus is definitely the safest route, because it forces you to reassess at intervals the adequacy or excess of your replacement strategy.  A rate left unattended risks BOTH under-resuscitation and fluid overload.  Bolus with reassessment is the safest and most reasonable way to go.

And of course there is the cost.  A bag of saline costs the hospital about $1, but the charge can be from $10-100.  Ignoring the distinction between costs and charges, imagine that you're in the hospital for 4 days and part of your bill is $100 (or $400 or whatever) for 10 bags of saline.  The soda machine on the golf course suddenly looks cheap.

And that last observation harkens to one of the fatal flaws of a third party payer system in American healthcare - the consumers of the services are shielded from data on cost.  If those bags (and the zofran syringe and the lovenox, and the CT scan, etc.) came with price tags attached to them, you can be assured that patients would be asking a lot more questions about the necessity of each and every item used in their care.  And that you can take to the bank.