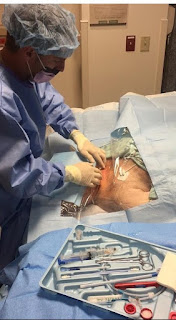 In every single case, the catheter was successfully inserted.  In no instance was it reported that, before insertion of the catheter, an operator looked and said "Oh, Shit, where did that guidewire fly off to?"  If Bivens' report is true, it appears to be the very first time a wire was (almost) lost in the way he reported.

A trusted and famed mentor used to tell me not to believe everything I read, and I'm going to apply that advice to this case.  I simply do not believe it happened as reported.  I wager (>9:1 odds) that it is an embellishment used for dramatic storytelling and editorializing about the horrors of nuclear war.  Which is probably fine.  But I don't think it should mislead trainees about what a wire can do, or what you ought to do to prevent mishaps.  That wire doesn't have wings, but when you don't pay attention, you give it the push it needs to get into the patient, during catheter feeding and flushing afterwards.

Carl Sagan said "Extraordinary claims require extraordinary evidence" (he must have been a Bayesian).  So if you ever see a catheter migrate on its own, please shoot a video of it.  Else I'm going to call your bluff.
Posted by Scott K. Aberegg, M.D., M.P.H. at 3:43 PM