"No! Not NARCAN!" Exclaimed the Woman Not Breathing and Being Bagged 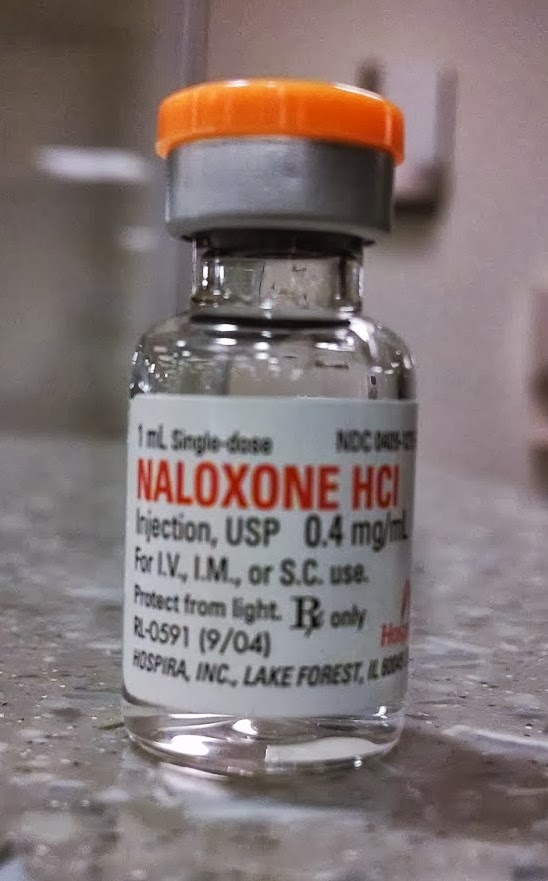 I will begin this post with a little anecdote.  It was about ten years ago at Johns Hopkins Hospital and I responded to a "Code Blue" on the step-down unit.  There was a woman, about 30 or 40 years old with several chronic medical problems who had stopped or nearly stopped breathing.  I was at the head of the bed delivering bag-mask ventilation (bagging; using the Ambu-bag, the first responder kinda thing).  We were preparing to intubate (insert a breathing tube into the trachea) the patient when an astute co-fellow, L.R., came on the scene and inquired as to whether the patient might be overdosed on narcotics.  He said aloud "should we try some Narcan?"  (Narcan counteracts the effects of narcotics and can cause arousal of a patient overdosed on them.)  This patient who was comatose, not breathing, and unresponsive in spite of being bagged and poked and prodded by the numerous staff who responded to the emergency, suddenly awakened and exclaimed, vehemently and audibly through the bag-mask ventilation:  "Nooooo!  Not NARCAN!"  Apparently, even a near-death experience is not as fearsome or worthy of arousal as reversal of the effects of narcotic medications.

Healthcare workers will find this amusing for its irony, and I could use it as a segue to a soapbox soliloquy about the dangers of narcotics, but I've already blogged that rant.  Here,  I'm simply using it as a segue to a discussion about the use of Narcan drips in the treatment of overdosed patients.  I was taught during a toxicology rotation in my residency a clinical saw that can be summed up as "If there's an antidote, give it."  Years of experience and reflection have borne out the wisdom of this adage.  Narcan and other antidotes are often benign and as I have discussed in other posts, their benefits even in uncertain cases often outweigh their potential harms enough that they should be given.  Narcan is especially useful when available to heroin addicts, when used by first responders in the field, or when used as a "test" of whether depressed consciousness is due to the effects of narcotics (as part of the "coma cocktail").  But when the decision has been made to admit a patient for observation after an overdose with prolonged effects, the question arises:  should we start a Narcan drip?

The reflex response is yes.  Recently I admitted a 30-something patient with heroin overdose who had stopped breathing while partying and shooting drugs with friends.  (As is often the case, they submerged him in a bathtub of ice cold water, as urban legend has it that this revives victims of overdose.)  In the ER, he had depressed consciousness and depressed respiration, but his oxygen saturation could be maintained greater than 90% with supplemental oxygen by nasal cannula.  The first unnecessary thing that was done was to apply BIPAP when an ABG showed a pH of 7.22.  (Another example of why too much testing and too many ABGs can create problems.)  Yes, it is possible that the patient will have improved ventilation with BIPAP.  It is also possible that he could vomit into the BIPAP mask and aspirate; that a "back up rate" set on the BIPAP may mask deteriorating intrinsic respiratory drive; that BIPAP will lead to several more reflex ABGs; that a declining pH on ABG in spite of BIPAP will trigger an unnecessary intubation; and that any/all of these things will prolong his hospitalization and worsen his outcome.  What I do know for a fact is that a primary respiratory acidosis won't hurt him.  The imperatives of his care in this case are to assure that he breathes at some nominal rate (say, at least 6 breaths per minute) to sustain some modicum of ventilation (which, by the way, gets more effective/efficient as PaCO2 rises - one breath eliminates more CO2 as PaCO2 rises) and that hypoxia is avoided.  Close monitoring of respiratory rate and oxygen saturation are the essentials of his care.  BIPAP will not speed the clearance of heroin or the reversal of the clinical syndrome.

I was then asked if we should start him on a Narcan drip.  There are several reasons I declined.  Like BIPAP, Narcan is not going to speed the clearance of heroin or the reversal of the clinical syndrome.  What it will do is make it less obvious when the heroin effects have dissipated.  At some point he will awaken on the Narcan drip, and the nurse will slowly titrate it down, then at some later point the physician will order it stopped, but will want to observe for recrudescent respiratory depression, etc - Narcan clouds the natural history of the disease and its resolution.  When my patient awakens without Narcan, there is little to conclude other than "he's better."  Moreover, if the nurse is too aggressive with his Narcan drip and he's chronically habituated to narcotics, he may awaken in a crazed withdrawal state, yank out his IVs, and cause mayhem in the unit in which he's receiving care.

The caveats of the non-Narcan approach are that close monitoring, such as in an ICU or closely monitored step-down unit is necessary (and ought to be with Narcan drips, too - although I admit that if I had to admit a patient to the medical floor with heroin overdose, I would probably prefer s/he be on a Narcan drip), and that severe compromise of gas exchange or impaired ventilation cannot be masked by supplemental oxygen.  I would not employ this approach if more than 6 liters of oxygen by cannula were required to maintain arterial oxygen saturations greater than 90%.  Indeed, oxygen requirements that rise above 6 liters nasal cannula should be a trigger for re-evaluation of patient respiratory status in diverse clinical scenarios.

I think Narcan is a prime example of having tools and wanting to use them for the sake of using them, rather than for the sake of getting an important job done.  Elucidating the pharmacodynamics of classes of compounds such as narcotics, then engineering drugs that angtagonize these compounds at their receptors in the brain, then delineating the pharmacokinetics of these interactions is indeed sexy stuff, a triumph of biomedical science.

But a triumph of science is not necessarily a triumph of therapeutics.  So, I will quote my patient from a decade ago:  "No!  Not Narcan!"