Your Last Words for a Few More Breaths: Unspoken Trade-offs in End-of-Life Care 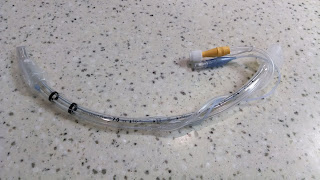 A man with widely metastatic cancer is admitted to the hospital for shortness of breath, deteriorates in spite of broad spectrum care, and is transferred to the ICU.  The patient is documented to be "full code" and, while the prospect of "coding" him is unsettling for his providers, they struggle to articulate exactly why.  (Correct intuitions are often difficult to dissect and describe.)  Often the discussion (amongst themselves or with the family) centers on the direct, observable, physical aspects of suffering that must be borne by the patient during the resuscitation process and/or the transition to life support.  "Breaking of ribs" and the like.

But years of quiet and thoughtful reflection identifies some second order and often unspoken nuances of the transition to life support that are perhaps more important than the first order physical aspects.  When the man dying of cancer deteriorates to the point that his oxygen saturation cannot be supported without life support or his respiratory distress is too severe, and I position myself behind that bed, propofol and an 8.0 (endotracheal tube) in hands, I know the oft unspoken truth - that this is the last time that this man will be indubitably conscious and coherent or will speak to anyone, most notably his family.  Insomuch as life consists of an interaction with one's environment, with a central focus on social interactions, the patient dies the moment I induce with propofol and insert that tube between the vocal cords.  He has traded his last words for a few more breaths.  (He has also traded away his ability to enjoy food or drink.)

This is not to say that this invariably happens.  Some patients, supported with mechanical ventilation, can have their sedation reduced, regain coherence, and write on a board to communicate with their families and friends.  But the exception proves the rule.  And this risk is not confined to the inexorably dying.  Any time that a frail, weak patient is subjected to surgery or any other physiologically stressful procedure, there is a risk of deterioration or the inability to remove the patient from life support after surgery and anesthesia - even if the surgical procedure itself is a "slam dunk" and goes off without a hitch.  (Surgeons have an exceptional difficulty understanding "what went wrong" in these cases. In a subsequent post, I will describe the precautions that must be taken before subjecting frail patients with disabilities to surgery.)

So it would appear that we have another facet of the failure of informed consent in critical care.  When we don't take great care to describe the trade-offs that medical decisions involve, we cannot guide patients in their choices.  The emphatic invocation "he doesn't want to die" is insufficient to tell the physician what the patient wants, and that life support should be instituted.  (Almost) nobody wants to die.  That's not the operative question.  The operative question is "when death is imminent and inevitable, what is important to you about your final moments?"

From the perspective of the person behind the bed, propofol and the 8.0 in hands, it is obvious.  I shudder to think that I should be dying, trade away my last words for my last breaths, and either go to sleep forever or awaken confused, scared, hungry, and unable to speak.
Posted by Scott K. Aberegg, M.D., M.P.H. at 10:27 AM