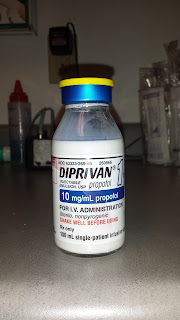 This would be a very informative case report (and it's true and unexaggerated), but I anticipate staunch editorial resistance (even sans puns), so I'll describe it here and have some fun with it.

Background:  The author has anecdotally observed for many years that so-called "septic shock" follows rather than precedes intubation and sedation.  This raises the possibility that some proportion of what we call septic (or other) shock is iatrogenic and induced by sedative agents rather than progression of the underlying disease process.

Methods:  Use of a case report as a counterfactual to the common presumption that shock occurring after intubation and sedation is consequent to the underlying disease process rather than associated medical interventions.

Results:  A 20-something man was admitted with pharyngitis, multilobar pneumonia (presumed bacterial) and pneumomediastinum (presumed from coughing).  He met criteria for sepsis with RR=40, HR=120, T=39, BP 130/70.  He was treated with antibiotics and supportive care but remained markedly tachypneic with rapid shallow respirations, despite absence of subjective respiratory distress.  A dialectic between a trainee and the attending sought to predict whether he was "tiring out" and/or "going into ARDS", but yielded equipoise/a stalemate.  A decision was made to intubate the patient and re-evaluate the following day.  After intubation, he required high doses of propofol (Diprivan) for severe agitation, and soon had a wide pulse pressure hypotension, which led to administration of several liters of fluids and initiation of a noradrenaline infusion overnight.  He was said to have "gone into shock" and "progressed to ARDS", as his oxygen requirements doubled to 80% from 40% and PEEP had been increased from 8 to 16.  The next morning, out of concern that "shock" and "ARDS" were iatrogenic complications given considerations of temporality to other interventions, sedation and vasopressors were abruptly discontinued, diuresis of 2 liters achieved, and the patient was successfully extubated and discharged from the ICU a day later.

Conclusions:  This case provides anecdotal "proof of concept" for the counterfactual that is often unseen:  Patients "go into shock" and "progress to ARDS" not in spite of treatment, but because of it.  The author terms this syndrome, in the context of Diprivan (propofol) in the ICU setting, "DIPSHIS".  The incidence of DIPSHIS is unknown and many be underestimated because of difficulty in detection fostered by cultural biases in the care of critically ill medical patients.  Anesthesiologists have long recognized DIPSHIS but have not needed to name it, because they do not label as "shock" anesthetic-induced hypotension in the operating theater - they just give some ephedrine until the patient recovers.  DIPSHIS has implications for the epidemiological and therapeutic study of "septic shock" as well as for hospital coding and billing.
Posted by Scott K. Aberegg, M.D., M.P.H. at 11:31 AM