Reflexes are for Knees! Geez! Why do you need so many ABGs? (An introduction to Bayesian Clinical Decision Making.) 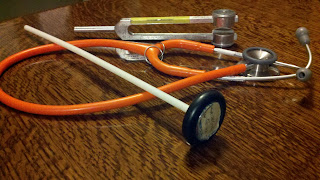 I wasn't always like this.  Ask co-interns and they will tell you I was the most notorious minutiae-obsessed physiology manipulator west of the Mississippi.

What changed?  Well, I grew up and realized that micromanaging physiology is most often a fool's errand.  Evolution was indeed a brilliant chemist (Max Perutz), and I recognize my impotence in one-upping him.  I can order zero ABGs or a dozen ABGs in a week and little changes but the volume of blood that is flushed down the drain.

So, using an example from earlier in the day, I'll lead you through a stream of consciousness explanation of why I can most often do without an ABG.

A man in his 30s is admitted for alcohol withdrawal (WD) for the sixth time in 12 months.  About half of these times, his WD has been severe and he has required ICU admission.  Overnight, during the administration of benzodiazepines for his WD symptoms, he has become progressively tachycardic and tachypneic and his oxygen needs have been steadily increasing.  His saturation on the monitor displays a good tracing at 95%.  BIPAP is applied.  I can hear his respiratory rate at about 25, and based on the flow I hear from the BIPAP machine, I can guess that his minute ventilation is about 15 liters per minute (these guesses could be confirmed with RT).   Knowing nothing else about his case, I am asked if an ABG should be ordered to assess his respiratory status.  Should it?

Well, I think it should only if the results are likely to influence my decision making.  Simply "to see where he's at" is not sufficient reason for me.  I would rather think through where I think he's at based on what I already know, and if it all adds up and nothing is unusual, I don't need an ABG.  When I see someone running and breathing heavy, I don't wonder what the ABG would show.  I understand the physiology of running and there is no need for further investigation in any particular case unless something unusual is happening.  Like the runner collapses.

The next part of the explanation can serve as an introduction of Bayesian Decision Making applied to clinical decisions.  I need to know nothing more than the information above to make some very good inferences about what's going on with this man's clinical status.  I need only think about what is common, and in particular what is common in this particular scenario.  What is this man predisposed to that will affect his lungs?

[An aside here - I used to implore medical students on their second year H&P rotation to think of a patient as a person who is exposed to various things in his or her environment.  In fact, the whole past medical, surgical, social, family, OBGyn, medication, occupational, travel and vaccination history is simply an exercise in revealing what exposures a patient has had that increase or decrease the prior probability of various disease states.  This is a very useful exercise and makes the importance of a past medical history paramount.  Another clinical saw that derives from Bayes' Theorem:  The most likely diagnosis is one that is common, or that is related to something we already know the patient has.]

Well, I expect one of two things (or both) to happen to a young man with WD who gets progressively hypoxemic overnight during the first 8 hours of admission, based on what I know about the natural history of this disease process.  (For a case synopsis of ETOH WD, see this recent Case Records of the Massachusetts General Hospital.)  One, I expect that he may develop atelectasis as he is given  benzos for his WD.  Two, also related to the benzos, I expect that he may develop micro- or macro-aspiration, or that any pre-existing aspiration may blossom into lung injury and full-blown pneumonia as he receives fluids for resuscitation.  Quite simply, I look at his exposures both prior to and during the hospitalization and determine what he's most likely to get.

But what if I'm wrong?  I know that I could be, and in the back of my head, I'm thinking of other possibilities, ready to revise my initial suspicions as soon as there is something out of place or I "smell a rat" or new information becomes available.  One of my favorite adages for clinical decision making is that the most common reason for missing a diagnosis is failure to consider it.  This is self-evident, so much so that the message fails to be internalized.  This is no place to enumerate and elaborate all kinds of decision making biases, but it is important to point out that the list of possibilities should remain broad, but the list of probabilities should be ordered and succinct.

This guy could have Langerhan's Cell Granulomatosis or sarcoidosis after all is said and done, but this is no time to be ordering CTs, biopsies, ACE levels and ANAs.  But what other possibilities warrant consideration as probabilities at this juncture?  Well, what other things is an alcoholic exposed to?  Things that crossed my mind are community acquired pneumonia such as S. pneumo and Klebsiella and it's influenza season - he could surely have that.  He could have an alcoholic cardiomyopathy with congestive heart failure and cardiogenic pulmonary edema.  He could have asthma.  He could have a bronchial foreign body.  All of these are possible, some maybe even probable in the right scenario, but none fits with his deterioration after admission as well as progressive atelectasis and/or aspiration does.  (And yes, anybody can have PE, but I'm not going there because of what I reveal below.  PE need rarely be investigated in patients without a swollen leg and who have parenchymal opacities on CXR that sufficiently explain the gas exchange abnormalities, and the last thing I want to do is give this alcoholic guy an anticoagulant anyway.  All these are reasons to dismiss this -at least for now.)

I want to sort out the top two probabilities and I can't help myself.  I open the CXR file and sure enough, there are low lung volumes and discoid (plate-like) atelectasis  thereby confirming my first suspicion.  Does this rule out aspiration and pneumonia?  Surely not, and I would opt to give him antibiotics for 3-5 days just in case, based on the threshold model of clinical decision making.  (Quite simply, the probability of harm from antibiotics for a couple of days is so low in my model [and the consequences of untreated pneumonia so high] that the probability of pneumonia doesn't need to be very high for me to cross the threshold and treat.  This threshold is now and usually is a low one.)

So, back to the ABG - do I need one?  Well, what information does the ABG provide?  Information about oxygen tension in the blood (PaO2, a surrogate for what I really want to know, SpO2), the carbon dioxide tension, and the acidity or pH.  Are any of these truly a mysterious unknown right now?

Again, what are my expectations?  Firstly, I expect atelectasis, especially that developing acutely, to cause a significant degree of hypoxemia, just like what is happening.  And I already know it's significant because he was on high flow oxygen by mask and is now on NIPPV with saturations below 100%, so he's either shunting or has V/Q mismatch, both compatible with the conditions I'm considering (and indeed compatible with just about every single disease that causes hypoxemia).  I also already know that his oxygen saturation is acceptable based on the internal algorithm of the pulse oximeter.  And I have no good reason to trust this less than the internal algorithms of the blood gas machine which will extrapolate from the PaO2 to derive an SaO2.  So there is no need for me to gather further information about oxygenation.  Everything I need to know is right before me already.

Secondly, I expect his pH to be somewhere near normal.  He has been sedated with benzos, but they don't depress respiration that much, and I hear a good respiratory rate and high flows, so I think his minute ventilation is adequate to maintain normal pH across a range of dead space and CO2 production assumptions.  But  I also expect that his CO2 production is elevated during WD, and that there may be some tendency for hyperventilation and respiratory alkalosis from agitation, as well as a tendency for metabolic acidosis from lactate or alcoholic ketoacidosis or saline infusion or whatever.  Bottom line is I don't believe that he's been sedated heavily enough to have impairment of respiratory drive sufficient to cause his pH to drift that far from normal, and the amalgam of things that are going on simultaneously and pulling values in different directions is really beyond my ability to discern completely with or without an ABG.  The only thing I can know with reasonable confidence is that, barring profound respiratory depression (which I would determine from respiratory rate and pattern), he will mostly compensate and maintain his pH close to normal.

But it doesn't matter.  Somebody else already ordered an ABG, and they bring it to me.  As is my custom, I don't look at the results.  I flip it over and list my guess of the ranges of what the values will be based on my reasoning above.  And I always guess ranges that, if the actual values fall within them, I will not make any changes.  If falling within my ranges would lead to a change in course, my ranges are too wide.  If the true values fall outside of my ranges, either I should have ordered the ABG, or my ranges are too narrow.  (A discussion about the appropriate ranges of indifference could ensue, but I'll save that one for later.)  Note here that this exercise affords me the opportunity to calibrate my decision making.  It conforms to decision theory - I have domain specific knowledge, I have had a lot of practice, and if I do this blinded and get immediate feedback, I will be able to calibrate myself further.

I was off quite a bit on the PaO2 (does it matter?) but the rest of the results fall right within my comfort zone based on what I expect is going on.  And my plans don't change one bit.

Can I always guess the results with sufficient confidence to obviate an ABG?  I don't know for sure, but I know from years of practice that I'm pretty close and rarely surprised.  Can you achieve the same results?  Maybe, maybe not.  But if you take the time and effort to think through the problem in this fashion, you will calibrate your own medical decision making and your guesses about the ABG results
.
When do I get an ABG?  When I can't figure out what's going on, or when things are going against my reasonable expectations.  For me, that's the time to get more information.  Not as a knee-jerk reflex, but as an actual investigation into something I don't understand and I need more information to try to figure it out.

Oh how you love to draw some blood
Send it to the lab in a hemorrhagic flood
Chase down the result
Anemia not your fault
While I just stand by, chewing my cud

Too many tests, so much confusion
Then it comes time for a bloody transfusion
Do this instead
Just use your head
Labs don't crack cases open, it's just an illusion!
Posted by Scott K. Aberegg, M.D., M.P.H. at 6:17 PM