The risk with testing, using one of various available assays (choosing among them presents its own set of challenges), is that you will falsely exclude HP given the high pre-test probability.  Using data from Table 1 of the JAMA article, I calculated the negative likelihood ratios (LRs) for the available tests and they range from 0.07 with urea breath testing to 0.34 with rapid urease testing.  Adjusting the prior probability of 73% by those likelihood ratios for negative tests reduces the probability of HP from 73% to 17-50%.  Faced with such a scenario, you now have to decide:  in this patient with PUD, is a probability of 17-50% low enough that you will not treat?  If it's not, you can treat in spite of the negative test, in which case you should not have gotten the test in the first place.  Alternatively, you test again.  Two negative tests with LRs in that range will reduce the posterior probability to about 10%, and three to around 5% or less.  Is it worth it to do two or three tests or would you be better off with a policy of just treating without testing?  I don't know.  But, you can use this same line of reasoning to see what your life will be like if you employ a policy of testing and compare that life to one with a policy of not testing.

Suppose we're treating a population of patients with PUD where the true prevalence of HP is 73% and that we select serology (perhaps the most convenient of the available tests; its (-)LR is 0.17, right about in the middle of the range) as our testing modality with a sensitivity of 88% and a specificity of 70%.  If we test 100 patients with PUD (number chosen for simplicity), we will get 72 positive results, 28 negative ones: 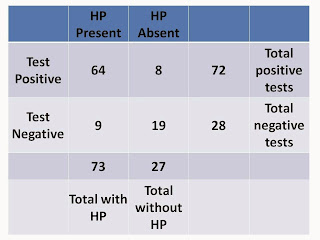 So, we've already done 100 tests, and we now need to deal with those 28 negatives (because, while we can't know which ones, some of them are false negatives).  Note that there are 9 false negatives and 8 false positives - if we stop testing here, we will miss treating 9 actual cases of HP and we will treat 8 cases which don't have HP.  Treating 8 that don't need it is better than treating 27 that don't need it with the no-testing strategy, but it comes at the cost of doing 100 tests.  To [try to] get out of this mess, we run another test on the 28 negatives: 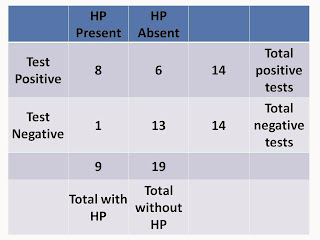 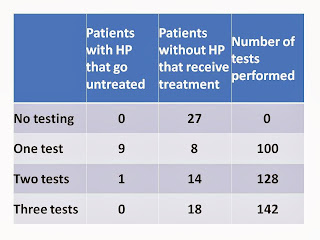 If it were me, I would prefer to cut the chase and just be treated.  Especially if I were a patient paying for testing and treatment.
Posted by Scott K. Aberegg, M.D., M.P.H. at 2:15 PM